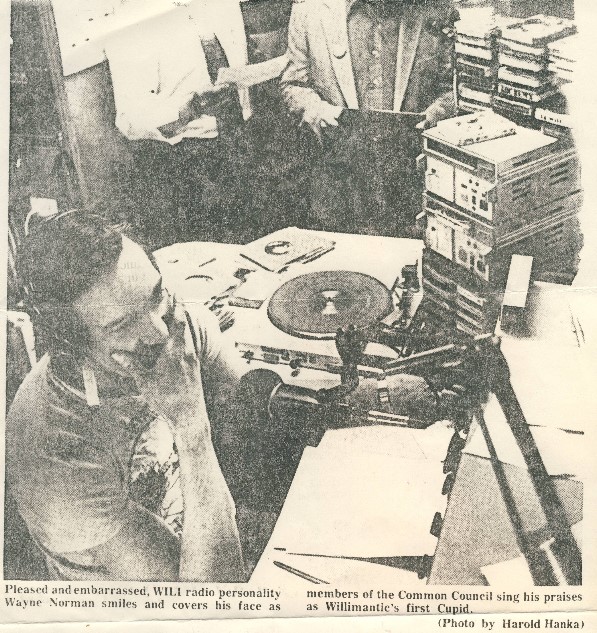 Wayne-o, as the morning disc jockey and sportscaster is known, was taken by surprise this morning when Mayor John Lescoe was to announce live the Common Council’s choice for a Cupid who has done a lot for the city’s image.  It was a closely guarded secret, but smirks on station personnel revealed they knew in advance, even if Norman didn’t.

Council members crowded into the studio and began singing, “We love you Wayne-o, We honestly do, We picked you as our Cupid, because Willimantic loves you.”

Norman produced the closest thing to a blush he owns and buried his face in his hand during the song, but recovered his composure to broadcast a graceful, “Thank you very much.  I think it should be reported here that this comes as a complete surprise to me.”

Lescoe read a proclamation that listed Norman’s accomplishments as a sportscaster and supporter of sports, especially for youth, noting he always conveyed to his listeners a positive image of the city.

Lescoe had refused to reveal who the Cupid would be, building suspense with the information simply that the council would meet at 8:30 this morning at town hall to practice a song he had written and travel en masse for a suprise announcement.

The town building was closed for Lincoln’s Birthday so he took the group over to the radio station across the street for practice in the back room there.

Lescoe, dressed in a tan corduroy suit with an appropriate red, open-necked shirt, and sporting both a Romantic Willimantic pin and a red stick-on Chamber of Commerce heart, led aldermen Frank Ereshena, Robert Sawyer, and Gail Zaicek inside, passed out coffee, and had copies made of teh verses he had written to be sung to a tune similar to the theme song for the “Brady Bunch.”

Alderman Neil Mesick arrived in time to run through the song a couple of times with the Council Chorus, and then the group awaited the end of the 9:00 news and movie review for their air time.

Norman sat in his swivel chair in the broadcast booth clad in a tan “Romantic Willimantic” tee-shirt, promoting the Cupid declaration on the air, while council members clustered out of sight chuckling among themselves in anticipation of the suprise they were about to spring on the affable disc jockey.

“Does this mean I’ll have to run around naked?” Norman jested after it was sprung.  In on-the-air conversation with Lescoe, he asked if this was to be the first of many city Cupids to come, and the Mayor replied, “I hope so.  Maybe next year we can get you a mate.”