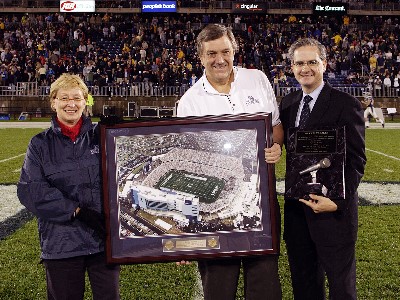 Jodi Rell wasn’t our governor yet when she named Wayne Norman “a Connecticut Treasure” last year, an honor Rell established to “recognize individuals and groups in the state who have worked for the betterment of their communities.”

And now Norman, the once and future voice of WILI Radio in Willimantic, is about to exceed his days as a mere “treasure” and graduate into a Connecticut Institution.

Norman will call his 1,000th UConn game on the UConn Radio Network on Thursday at Rentschler Field, an evening when such an event befits the momentousness of the event. The dream Randy Edsall sold while recruiting prospective football players to rickety Memorial Stadium – one day, you’ll be playing in front of 40,000 under the lights on national television – becomes profound reality: UConn will play its first Big East home game, vs. Pittsburgh under the lights on national television.
And in the radio booth, next to his friend and broadcast partner Joe D’Ambrosio, will sit Norman, the way he has for 999 other games.

Clearly, Norman tells other people’s stories better than his own.

“People know him as this big, lovable guy who works at a relatively small station in Willimantic and does UConn color,” D’Ambrosio said, “but he never gets the credit he deserves for the job he does. He is incredibly well prepared. He knows what to look for away from the ball in football. He picks up stuff the dumb play-by-play announcer misses in basketball. And as good as he is, he’s even a better person.”
Indeed. Norman, as meticulous with his game preparation as he is self-deprecating, has let the game be the story for more than 20 years. No homerism. No yahooism. No ego. “A pro’s pro,” as D’Ambrosio calls him.

Norman has been the understated constant in an athletic program of fervid change, from just another New England outpost in the Yankee Conference, to bookend national basketball champions and 40,000 at Rentschler for the nation to see. What began Sept. 22, 1979 when the football team played at Navy lives on triumphantly. What began next to a play-by-play man named Rick Benjamin lives on with D’Ambrosio, an Old Saybrook native, who happens to be one of the best college play-by-play voices in the country.
Wayne Norman was there before the Big East.
He was there next to late, great Marty Glickman, who belongs in every play-by-play voice top 10.
He was there when Tate George made The Shot, standing with 20,000 others at the Meadowlands when play-by-play voice Bob Heussler, now the voice of the Connecticut Sun, jumped, as Norman says, “like he was on a pogo stick,” yelling “HE GOT IT! HE GOT IT!”

He was there in ’96 when Ray Allen made the Wallenda shot against Georgetown in the Big East final, next to D’Ambrosio, whose call of the last 15 seconds can go toe-to-toe with anyone, anywhere, anytime.

He was there in ’99 when Coach K became such an appropriate name for the coach whose team swung and missed – still the greatest night in state sports history.

He was there for the opening of Rentschler last year.
He was there against Duke last year, with no voice, rasping his way through post game interviews, while D’Ambrosio called it “a Kim Carnes imitation.”

Most importantly, he’s there every day, hustling throughout the bowels of the Civic Center after a game, getting this interview and that one, live and on tape, asking thoughtful questions. He’s there everyday at WILI, everyday since 1971, on the longest-running morning show in the state.

“I was listening (Tuesday) and Wayne was doing his birthday thing, just like he does every day,” Norwich native and UConn Director of Athletic Communications Mike Enright was saying, “and Wayne says that (Tuesday was) Clay Johnson’s birthday. Who else would know that?”
Johnson was a fairly nondescript UConn basketball player from the 1970s, likely known only to Mrs. Johnson, co-workers, Dee Rowe and, of course, “Wayno.”
Norman, who has called all four Eastern Connecticut State University national baseball championships, spent some time Tuesday reflecting on his career, forgoing any talk of himself by talking about some of his favorite moments and people. He’s worked with nine play-by-play men, but in Glickman, Heussler and D’Ambrosio, has his own Tinkers to Evers to Chance.
“Marty taught me that if you feel something, say it,” Norman said. “He said, ‘You’re at the game, the listener isn’t.’ Bob? I love that guy. His call of Tate’s shot, and the way his voice reflected the desperation and then the joy of the moment was perfect. And as far as telling the whole story, Joe does it the best. The way he recognizes players during football, I’m looking on the depth chart and he’s already got the name. If I had to pick one guy to make the dramatic call, it’s him.”

And if Joe D. had to pick the one guy he’d want there next to him …

“He’s my best friend in the world,” D’Ambrosio said. “He loves Broadway plays and the weather. He’s seen Phantom of the Opera more than anybody who hasn’t acted in it. … We have a great time on the road. We’re driving and an oldies station comes on. Wayno can tell you the song, artist, label and how long until the vocals begin. It drives (engineer Tim) Helmecki crazy.”
While you’re watching Thursday’s game, hit the mute button and give a listen to the man who is the audio backbone of UConn sports. All hail Wayno, a man of understatement whose grace over 1,000 games can’t be overstated.