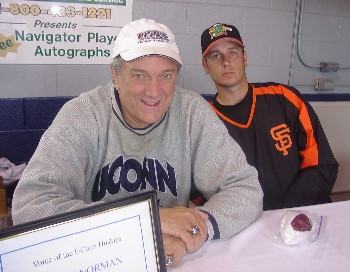 Thrilling victories, crushing defeats, comical mishaps, colorful coaches, players, and fans these are the legendary moments and larger-than-life personalities that have made the UCONN Huskies a basketball favorite.

In HOOP TALES: UCONN HUSKIES MEN’S BASKETBALL (March 2005; Globe Pequot Press), radio analyst Wayne Norman and UCONN alumnus Robert Porter share their favorite memories of this beloved team. From its first moments of regional prominence against Holy Cross in the 1950s to the 2004 NCAA national championship team, this book takes you on a wild ride of New England basketball at its best.

Read about Wes Bialosuknia, the “Poughkeepsie Popper” of 1960s fame, who was perhaps the greatest shooter ever to wear a Husky uniform. Learn about Ray Allen, perhaps the greatest all-around UCONN player ever. Then, of course, there’s the Jim Calhoun era, which has produced scores of great players, two national championships (1999 & 2004), and a lifetime of thrilling basketball moments and memories.

If you’re looking for the ultimate history of UCONN Men’s basketball, this is it, as virtually nothing has been written on the early years (from 1950s through 1980s) until now. These stories are must reading for all Husky fans. They entertain, inspire, and bring back to the spotlight the indomitable spirit and energy that is Huskymania.

WAYNE NORMAN has been a UCONN basketball and football radio commentator for over 25 years. His broadcasts are currently on WTIC, Connecticut’s largest radio station, where he works with play-by-play announcer Joe D’Ambrosio. Wayne broadcast his 1000th UConn game in 2004.  He also has the longest continuously running morning radio show in the state at WILI-AM (1400).

ROBERT PORTER is a 1971 graduate of UCONN and a lifelong Huskies fan. While in college, he did play-by-play broadcasts of UCONN basketball games for radio station WHUS. He has also done freelance sports writing for papers in Connecticut and works full time as a consultant in international banking.

By Wayne Norman and Robert Porter